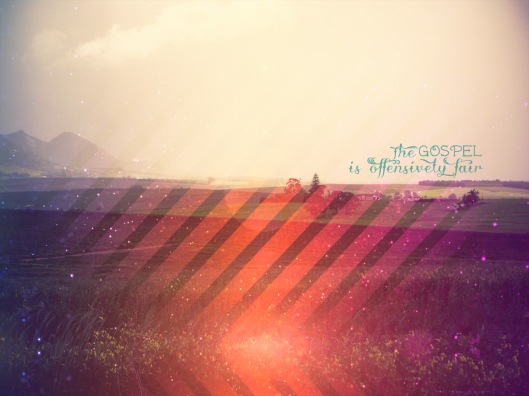 The Gospel is offensively fair.

If I’m honest, that often catches me off guard.  I run into people everyday that I’ve labelled and written off.  People who are arrogant, or jerks.  They are my list toppers for people that I don’t expect to get a shot at grace.  But then I read something like this…

All.  That’s a word that I have a problem with.  I want the Gospel to be just in the way that I understand justness;  that those of us with church trophies and mission trip souvenirs get access to the good stuff.  But God’s fairness bears a different standard from what I consider to be fair.

Yet, the Lord laid on Him the sins of us all.

Not on our shoulders.  Not on us.  What a dangerous approach to redemption, this unprejudiced grace.  How much risk is involved for God?  It seems to put Him in a precarious position.  And, for what end?  What does He stand to gain from it all?

Yeah.  That’s really it.  All that He stands to gain if things go according to plan is you.  He really is that in love with us.  Our sins, on His back.  That’s what He’s willing to do just to know us.  It’s not about knowing the right answers or being the most spiritual person in the room.  It’s not about figuring it all out, or getting in the club.  It’s not about growing churches or attending them.

It’s about the mystery, complexity, and simplicity of it all.

Love isn’t a Sunday school lesson, or a sermon point.  It’s the offensively fair way that things are meant to be.

Comment below and tell me;  What’s a dangerous way that you can tangibly exhibit love this week?

5 thoughts on “LOVE IS OFFENSIVELY FAIR…”